Production designer Fred Andrews, whose television credits include Without A Trace and CSI:Miami, makes the transition to the director's chair with Creature, a low-budget horror set within the backwoods and swamplands of Louisiana.

Starring Mehcad Brooks, better known from stints on Desperate Housewives and True Blood, and numbering Sid Haig and Pruitt Taylor Vince among its collection of stereotypical rednecks, Creature is hackneyed, dull and entirely devoid of wit, invention or tension. I can imagine the lure of directing a movie is a strong one, and cast and crew members have got to pay the rent the same as everyone else, but I have to wonder what exactly goes through the minds of those responsible for writing such utterly derivative material? Tracy Morse and Andrews himself share writing credits on Creature, and if I were either of them, I'd be sorely tempted to omit this fact from their resumes.

You know the drill in movies like this, a bunch of cliched characters, led by tough but caring Niles (Brooks), head off for a vacation, encounter sinister, unwelcoming locals deep in the heartlands of America and get killed one by one in tediously predictable fashion. Bayou mysticism, rural lawlessness and incestuous families collide with youthful recklessness, sexual promiscuity and urban values as a legendary creature, a half-man/half-alligator hybrid dubbed Lockjaw by the locals, proves to be an all to real threat to the vacationing friends.

A throwback to the monster movie era, Creature largely eschews CGI in favour of good old-fashioned make-up effects. While that's to be applauded, the resulting half-man/half-alligator costume under which Daniel Bernhardt is buried is so ridiculous to behold that any suspension of disbelief, which has already been stretched to breaking point, is shattered beyond salvation.

Whether it's a spoof of or homage to the cheap and cheesy creature features of the past or it fails either way, as the jokes, set-piece sequences and characters fail to register on anything other than the most superficial level. Even a narrative twist that occurs as the horror begins to unfold and the friends start to realise the danger they are in is so clearly signposted as to render it less a revelation and more like a poorly disguised attempt to breathe some sort of life into the turgid screenplay.

As a lifelong lover of the genre, including everything from the Universal Horrors of the 30s and 40s, the Video Nasties, via horror comedies to psychologically driven movies, I'll happily sit down and give any and all entries into the canon a chance. After spending 90 minutes in the company of this flaccid, pointless addition to it, I'm tempted to revise that attitude. 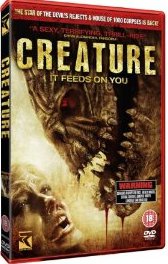 Vacationing friends face a half-man/half-alligator creature in the Louisiana backwoods.