Imagine waking up one morning and finding all the things you take for granted in life are missing. The electricity’s off, your mobile doesn’t work – and someone’s sealed your doors and windows shut…

That’s the starting point of Neil McEnery-West’s taut and gripping debut, which mines the themes of urban paranoia and “the world turned hostile” that American cinema (and TV) has always explored to great effect – from the Planet Of The Apes reboots, through The Walking Dead and Under The Dome right back to the daddy of them all, George A Romero’s Night Of The Living Dead.

Containment can’t boast Hollywood/Netflix budget levels. And McEnery-West doesn’t have Romero’s genius for creating “everyday horror” (then again, who does?). But he turns his restrictions to virtues, creating a nightmarish, hermetically sealed world where his audience share the protagonists’ sense of brutal dislocation.

The film opens in a rundown, nondescript tower block in a grey Anytown. Mark (Lee Ross), a struggling artist and divorced dad, is going about his morning routine, somewhat aggrieved at his reduced circumstances. But today the clocks have stopped, the electric isn’t working – and he can’t even get out of the door.

A shouted conversation through the paper-thin walls with his elderly neighbour Enid (Sheila Reid) reveals she’s in the same boat. He notices residents in the block opposite holding up “help” signs. A group of anonymous figures in “hazardous material” safety suits arrive and set up what initially looks like a mobile medical centre, but turns out to have a more sinister purpose. Then a voice on the block’s telecom system tells everyone to stay calm – and stay where they are.

All is clearly not well. But before Mark can begin to process any of this, a hammer knocks a hole through his wall. It’s his other neighbour Sergei (Andrew Leung) and his kid brother Nicu (Gabriel Senior). Sergei, a blinged-up teenager, isn’t prepared to sit around doing nothing. He doesn’t believe any official reassurances. And he’s determined to get out before the “hazmats” come and get him.

The neighbours make an uneasy alliance and together with a young couple from along the corridor – passive-aggressive Aiden (William Postlethwaite) and his more practical girlfriend Sally (Louise Brealey) – try to find a way out.

These early scenes have a brittle, real-time intensity as the glimpses of the world outside (and the disintegrating society inside their block) yield scenes of increasing horror, and the ordinary, non-heroic group make mistakes and start to rub up against each other. When they capture a “hazmat” (Pippa Nixon), who tells them the grim truth about the emergency, they realise that escape is the only chance of survival. And they’re probably not all going to make it…

It’s a classic drama set-up, and none the worse for having been used a time or two before. Some of the characters are, admittedly, rather too close to the stereotypes of the genre. There’s the bewildered Everyman. The feral outsider you’d normally cross the road to avoid, but who might just be a lifesaver in these circumstances. And, of course, the useless permanent whinger – as a quiet, bookish type myself can I make a plea to filmmakers to not ALWAYS turn us into the untrustworthy weak link? Just a thought.

But as the drama progresses, the personalities in the group do expand and develop. Making the sense of loss when the multiplying perils take their toll all the more acute. A classy cast of TV veterans and RSC stalwarts uniformly put their backs into it. Reid (Madge from “Benidorm”) turns from an irascible, borderline racist to a quietly dignified mother-figure in the dysfunctional group, as well as a poignant comment on the decline of community that the tower block symbolises, a living link to the time when the grey prisons were seen as “the homes of the future”. And Ross develops a backbone and a sense of purpose in his determination to ensure that young Nicu, at least, will find safety and a new family again…

McEnery-West, together with his co-writer David Lemon, keeps the script tight and plausible. And as a director he shows a keen eye for discovering sci-fi landscapes in the guts and bones of a tower block, building the sense that (as Kafka and Orwell knew well) there’s nothing more frightening than the state turning its resources against you – and producing a telling cutaway to an outside world where, outwardly, everything seems the same.

Containment hasn’t got the creeping dread of the American masters of the genre, or the kinetic energy of Danny Boyle’s 28 Days Later. But it’s a solid, classy addition to the genre. And leaves you curious, and very excited, as to what the director (and co-writer) are going to do next. 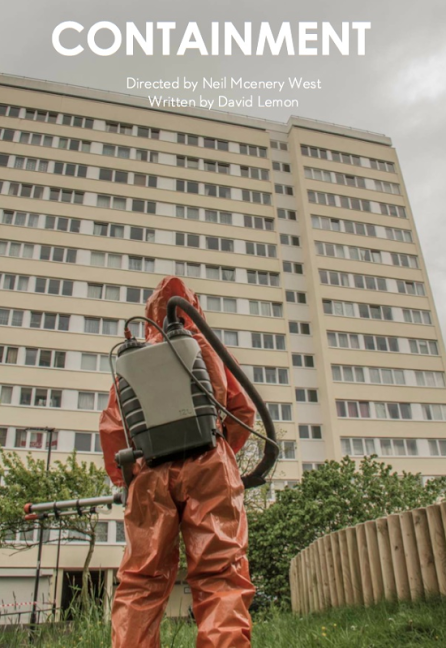