Ever since John Singleton's Boyz N The Hood, ghetto flicks have taken on a new criteria; you can't fake it. The reality of drug gangs in a gun culture is not sexy, as Hollywood would have us believe, but merciless and random.

It is heartening in the age of multiplexes and blockbusters to find a filmmaker who commits to cinematic honesty with the conviction of a convert. Fernando Meirelles, a middle-class movie director from San Paulo, read Paulo Lins's novel about the life of gangs on a housing project in Rio de Janeiro and decided to adapt it for the screen.

This involved two years of preparation, workshopping local kids, gaining the trust of the jailed "owner" of a slum district, similar to that of Cidade De Deus, and compacting a 700 page book into a 130 minute screenplay. With the help of scriptwriter Braulio Mantovani, the improvisational skills of untrained actors, the experimental techniques of cinematographer Cesar Charlone, who achieves what Meirelles calls "non photography", and editor Daniel Rezende, whose only experience had been with commercials and pop videos, the result is a living portrait of youth rage and criminality within an anarchic structure, where law is the enemy and corruption the currency. God doesn't live here; neither does hope.

The narrator is Rocket (Alexandre Rodrigues), a boy on the edge of pre-teen gangs, too afraid to join in. He observes the evolution of his friends, The Tender Trio, who rush about with deadly weapons, holding up lorry drivers and breaking into brothels, before discovering the financial advantage of hard core drug dealerships.

In the Seventies, Rocket dreams of being a photographer, a vain chance since he has never snapped a picture in his life. The Tender Trio has evolved into a less than tender duo and a new menace is on the rise - a crazy kid called Lil Dice, who has grown into a psychopathic teenager called Lil Ze (Leandro Firmano de Hora).

The drug scene in the City Of God is split between the white-skinned Carrot (Matheus Nachtergaele), who can be trusted to treat his boys half decently, and the black-skinned Lil Ze, who has ambitions to become a famous gangster.

Although the film centres around these characters, it covers the territory and conveys with a frenetic camera and pulsating soundtrack, an energy and vitality that leaps at you like a lion. 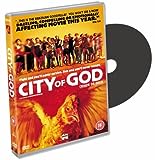 A gritty look at gang life in Rio De Janeiro.

Writer: Braulio Mantovani, based on the novel by Paulo Lins