#chicagoGirl: The Social Network Takes on a Dictator

Joe Piscatella's film is the latest in a growing trend of documentaries about the Arab Spring to focus on activism outside of the countries where a revolution is happening - a topic of increasing relevance in the UK if you consider the recent case of the Cardiff youngsters now advocating jihad.

The recent First To Fall and Point And Shoot outlined the way that those not involved initially in the conflict travelled to Libya in order to fight and Piscatella's film takes on the related topic of the importance of social media. This is again a subject that has been covered fairly extensively in films including The Uprising and The Green Wave, but Piscatella takes a different tack in concentrating on a single 19-year-old, Ala'a Basatneh, a Chicago-based college student who became a key activist when it came to organising protests back in Syria, her country of birth.

From her bedroom in the burbs, Basatneh tends Twitter and Facebook feeds, takes Skype calls and uploads videos - "from my laptop, I'm running a revolution in Syria," she says. Basatneh is a compelling presence in the film and a strong reminder to those who lament the apathy of the 'youth of today' that activism among the next generation is very much alive and well.

Piscatella's film broadens slightly to consider some of her other collaborators, Syrian-born, Syracuese NY film student Bassel Shahade and Aous al Mubarak, a dental student turned revolutionary in Damascus, who eventually stops shooting pictures in favour of bullets. The director's approach is brisk and he offers a grounding in the revolutions that have peppered the region near Syria - although his suggestion that the Tunisian and Egypt revolutions are somehow 'complete' is a simplification. The further the film runs, the more it begins to lose focus, torn between a desire to paint a bigger picture of activism on the ground in Syria and the remarkable story of Basatneh's move from a kid who hung out with her friends to a control centre master, trying to keep the friends she has never met out of harm's way.

Part of the problem no doubt lies in the fact that there is only so much, presumably, that Basatneh can say about the way that she runs her networks without jeopardising them - as the film makes clear, Syrian president Bashar al-Assad's regime is swift to target the online 'lives' of those they arrest. There is also a problem of presentation here, with the production values feeling much lower than other recent revolution documentaries - the scoring, in particular, heavy-handedly trying to steer emotion. There's also a noticeable plug for a specific privacy protection product made by one of the talking heads, which feels cheap when you consider he is one of the film's executive producers.

The film's strongest idea is that of solidarity through connection - that simply having an international support network fuels the fire of revolution through what one expert terms an "information cascade". It also shows how these connections lead to increasing involvement of those outside the country, including ultimately a desire to get phyiscally rather than virtually signed up. It also serves as a poignant reminder that there is nothing 'virtual' about the lives being lost. 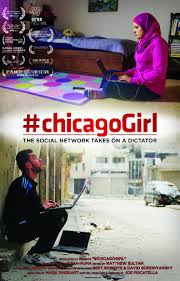 Documentary about one youngster's social activism as she leads Syrian protests from her US suburban bedroom.