A devilishly compulsive experience, E. L. Katz's directorial debut has as much in common with Neil LaBute's acerbic sensibilities as it does with modern horror tropes. There's a stagey quality to the four-hander script that's reminiscent of Stuart Gordon's recent output, and the rich vein of black humour makes this even more accessible than other mumble-gore breakouts like You're Next. The central situation will have audiences questioning their own values, while the edgy performances will have them squirming with revulsion. As with Kim Ki-Duk's Pieta, it's a dire satire of post-recession society that will bounce around your brain for days.

Facing eviction and sudden redundancy, family man Craig stops in at a bar to drown his sorrows on the way home to his unsuspecting wife. A chance encounter with old school-pal Vince leads to a boozing session funded by wealthy strangers Colin and his aloof, near-mute wife Violet. Daring the duo to perform increasingly degrading acts for further cash rewards, Colin soon moves the party to the couple's home, where drugs and other influences up the ante from mere humiliation to actual self-harm. As Craig's frustrations with his lot and old resentments against Vince swell, the games become ever more alarming, Colin's lust for sick kicks - and budget for funding them - seemingly knowing no bounds.

There's a clue to the central class-war dynamic of Cheap Thrills in its very title, the rich couple obviously putting little value on the lives of these underlings just as their taste for suffering grows with their seemingly-bottomless bank balance. David Chirchirillo and Deadgirl scribe Trent Haaga's brilliantly balanced script holds similar contempt towards those willing to indulge their hosts, but they still manage to keep the audience on Craig's side; relating to his predicament is inevitable and willing him on in the sort of gore-gauntlet that might delight the Marquis De Sade makes the audience complicit in the exploitative antics.

Compliance's Pat Healy once again makes an excellent everyman, though here he's the flipside to that film's master manipulator; he communicates both Craig's mid-life crisis and his eventual rising to the challenge in a way that subversively suggests even the most mild-mannered office drone secretly has a masochistic psychopath lurking inside them. He seems to get some twisted self-worth from his efforts that keeps the escalating madness even more fascinating; the final shot of him is a startling indictment of - and warning against - his warped priorities.

Anchorman's David Koechner is also perfectly cast as the sleazily charismatic Colin; everything that comes out his mouth simultaneously provokes the characters and viewers in different ways. It's not a complete remove from his comedic personality - many of the blackest laughs are due to his almost Come Dine With Me-style sardonic commentary - but it proves he deserves to transcend his hitherto typecasting.

Ethan Embry proves his worth again as Craig's alpha male adversary, imbuing Vince with his own sense of nihilistic desperation that keeps him interesting as a character rather than a mere macho posture. If there's fault to be found it's that we don't know enough about Vince to care about him, while the usually impressive Sara Paxton is so superfluous - she bounced so well off Healy in Ti West's The Innkeepers, but serves little purpose here. 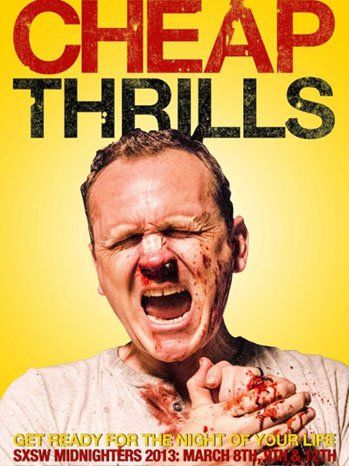 Two friends trying to drown their sorrows meet a bored married couple who engage them in a series of increasingly bloody and dangerous bets.