The world’s had to wait quite a while for a new laugh-out-loud girlie movie (unless you count last year’s Sex And The City 2, for all the wrong reasons), so this little gem is long overdue. However, don’t be tempted to dismiss it as another fluffy chick flick – this is a film with balls, bite and plenty to appeal to both sexes. Think The Hangover meets Bridget Jones’s Diary and you’re almost there.

Rising star Kristen Wiig (from the recent Nick Frost/Simon Pegg comedy Paul) co-wrote the screenplay and also stars as Annie, a 30-something singleton who’s broke, bored and totally down on her luck. So when her best friend Lillian (Maya Rudolph) announces her engagement, she’s determined to at least be a good maid of honour – if she can just cope with the expense, a rather motley crew of bridesmaids, and some fierce competition for the top job from the impossibly glamorous Helen (Rose Byrne). Not to mention the fact that she still hasn’t found her Plus One...

In the wrong hands this could have been cringeworthy, but helmer Paul Feig manages to wring plenty of laughs from a sassy script and a likable cast – and he’s not afraid to go for the gross-out gags every now and again either (if you’re munching your popcorn at the start of the dress-shopping scene, put it down pronto...). Kristen Wiig particularly shines in the leading lady role, proving that someone else besides Tina Fey can actually pull off funny, and The IT Crowd’s Chris O’Dowd is endearing as the traffic cop torn between pulling Annie over and just, well, pulling Annie.

Melissa McCarthy also puts in a great turn as eccentric bridesmaid Megan, who’s a bit like Alan from The Hangover minus the beard (her suggestion of a Fight Club-themed hen party has to beat afternoon tea and cucumber sandwiches any day). At a time when so many so-called ‘girlie films’ feature characters who are unattainably cool and groomed to within an inch of their life (ah yes, SATC, we’re back to you), it’s really refreshing to find a film where the females are portrayed as funny, flawed, insecure, rude, randy and sometimes just downright strange.

Whether you’re after a lively night out with the ladies, or simply want to take your other half to catch a decent comedy, this is well worth walking down the cinema aisle for. 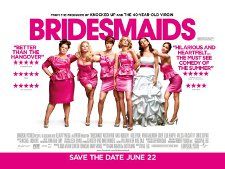 Despite her best attempts to be a model member of the bridal party, an unlucky-in-love singleton finds herself rapidly becoming the ’maid of dishonour’.