Boy is one of that niche group of films that are about children rather than strictly for them, such as Son Of Rambow, Stand By Me and Millions. The crucial ingredient for success is to make adults see things from a kid's perspective, and writer/director Taika Waititi wastes no time in thrusting us into the head of Boy - real-and-never-used name Alamein - as he gives his school class a whistle-stop tour of his life.

Thanks to the freedom of imagination and painfulness of the truth, his life as told by him is awash with adventure - a place where he will soon get to see his hero Michael Jackson, because his father will return, not from jail, but from a world of derring-do and noble punch-em-ups, to whisk him away to the city. For the moment, mind you, with his mum dead and dad in the nick, he's living along with his little brother Rocky - "He thinks he's got super powers... he hasn't" - and a string of cousins at his grandma's place. In fact, as we first encounter the 11-year-old with a 120mph imagination, he's in a position of high responsibility, looking after his younger siblings while his Gran is away at a funeral for several days.

Waititi picks a quote from ET to open the movie: "You could be happy here. We could grow up together." It is a perfect choice, since the ideas of responsibility, friendship and growing up form the strongly beating heart of his film - throbbing with poignancy and emotion, yet simultaneously desperately fragile.

When Boy's dad (played by Waititi) returns unexpectedly, it's clear that far from being an all-conquering army hero and diver extraordinaire desperate to reconnect with his kids, he is a two-bit crook who has chiefly come home to find the loot he stashed in the local field. The only problem being, he can't remember where. As the week without grandma progresses, it becomes hard to know who is the more grown up - the adults the children encounter, all of whom are highly irresponsible in their own way, or the kids themselves.

Waititi uses his Oscar-nominated short film Two Cars, One Night as a springboard for this story, developing the ideas of friendship in a way that celebrates the strong bonds that can be formed, but never loses sight of the tough circumstances that can sometimes bring them about. There is a perfect depiction of the sort of understanding kids have for one another that means they can squabble but that they also often make little sacrifices for each other to make life run more smoothly.

Almost everything about this film is a joy from beginning to end, the fantasy sequences flow seamlessly from Boy's narrative and never feel forced or tacked on, while there is a perfect sense of the New Zealand setting, with Waititi not shying away from local slang when it suits the mood. The Eighties are also cleverly evoked, with reference points, including everything from a paperback of James Clavell's Shogun to Michael Jackson's Thriller, worked craftily into the narrative. The acting, too, is wonderful. James Rolleston, as Boy, and Te Aho Aho Eketone-Whitu's Rocky have fantastic chemistry together as the kids at the story's hub, while Waititi manages to keep surprising amounts of sympathy with Boy's dad, even as his actions become increasingly reprehensible.

This is an upbeat, often hilarious, but never mawkish, celebration of love, that burns as fiercely and captivatingly as one of Boy's treasured sparklers. Stick around through the credits or you'll miss a treat. 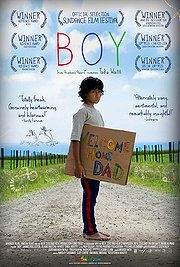 A Boy and his brother find their fantasy version of their dad is somewhat different to the real deal.