If all it took to make a great film was to assemble a group of excellent actors on top form, Barney's Version would be a winner. The central pairing of Paul Giamatti and Rosamund Pike is a great combination, with the two of them offering a lab-full of chemistry in this tale of a 30-year romance, while Giamatti's scenes with Dustin Hoffman - who plays his father - prove to be endearingly bittersweet. But no matter how watchable the three of them are, the story of the life of Barney Panofsky (Giamatti) is surprisingly flat considering how full of incident it is, with a lack of real emotional impact, particularly in its final third.

Beginning in the 1950s, when Barney is a young buck, the film goes on to chart his three marriages, destructive friendships, general miserabalism and even a murder mystery - but really hinges on Barney's lasting love affair with Miriam (Pike), who he comes to regard as his soulmate.

It's the sort of film that has wonderful moments but terrible half-hours. There are points in Barney's picaresque journey that prove poignant - generally when Hoffman is on hand to bring home the emotional bacon - but more often than not, when emotion is called for, Michael Konyves lays on the scripting far too thick.

This may be as a result of an overwhelming desire to be faithful to the source book by Mordecai Richler, to whom the film is dedicated, but one suspects it is more likely to be a hangover from Konyves previous work in the realm of television, where exposition can often outstrip visuals. Whatever the reason, words weigh down proceedings, grinding down the pace to such an extent that the final section, which should take us to the heights of emotion, feels instead like a never-ending wallow. Giamatti and Pike are so watchable that much can be forgiven, but you can't help feeling there is a better version in here somewhere, underneath the overwriting. 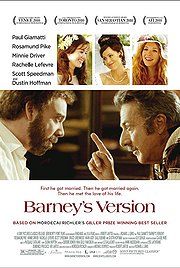 Four decades in one man's life, told as a personal confessional.