As the Judd Apatow generation of comic thesps slowly but surely matures, they're becoming a little desperate to be perceived as actual grown-ups. Paul Rudd has forged a career out of playing the reluctant man-child, hitting a new low of self-indulgence with the grossly tedious This Is 40, and now it's Seth Rogen's turn to prove that he's adult enough to move beyond the beer-bellied bong-hitting slacker schtick he's fallen back on for the last ten years. Bad Neighbours is far from bad, it's just a little misguided - director Nicholas Stoller hasn't learnt any lessons from previous amiable-but-stodgy efforts like Forgetting Sarah Marshall and Get Him To The Greek, except for thankfully keeping his run-time the right side of 100 minutes.

Mac and Kelly are new parents struggling to adjust to sleepless nights and social deprivation, so the last thing they need is a fraternity taking over the house next door. After giving house-heads Teddy and Pete a warm welcome mixed with a weak warning against disrupting the peace, the couple end up partying with their new neighbors til the crack of dawn, instantly setting them up as hypocrites should they deign to ask for quiet again. Soon the frat-pack are waging war on their neighbors for calling the cops on them, but Mac and Kelly resolve to get them turfed out by covertly busting their massive end-of-year celebrations.

There's something unconvincing about Seth Rogen playing a responsible adult that undercuts much of the comic tension in Bad Neighbours. Rose Byrne again proves she's one of the best funny-women in Hollywood, but her relationship with Rogen feels a little forced and mawkish. The script attempts to acknowledge the awkwardness by dealing with their troubles adjusting to parenthood, but Rogen's stoner banter makes him hard to warm to, although he's significantly more comfortable here than he was in Take This Waltz.

Flanked by deeply annoying lesser Franco Dave, Zac Efron somehow manages to makes his musclebound, braindead frat-boy sympathetic (perhaps partly in comparison to his more self-aware peers); there's even a lingering sadness to his eventual fate. As he did in The Paperboy, Efron proves he's much more than a pretty face, his character's arc arguably more interesting than the domesticity-into-dysfunction of the nominal heroes next door. Around him however all sorts of talent is wasted, from Lisa Kudrow as a stern faculty head to Christopher Mintz-Plasse as a well-endowed fratling; even the usual run of cameos featuring everyone from Andy Samberg to Jake Johnson feels obligatory rather than entertaining.

The main problem here though is the script's constant attempts to be as juvenile as its characters; it's hard to tell whether they're being criticised or lionised when the humour is so frequently lowbrow. The film falls more on the 21 & Over side of the fence than it needs to, but with so much of the focus on the grown-ups it's not as off-the-chain fun as the likes of American Pie. It's too hard to feel sorry for Rogen's yuppie-lite problems, and all too easy to root for the mischievous frat-boys, making their eventual comeuppance feel somewhat unbalanced.

For all that though, Bad Neighbours is still an enjoyable little time-waster, with enough amusing moments to counteract its sentimental streak and gross-out leanings. Byrne and Efron shine as brightly as ever, and the suburban ennui feeling of impending mid-life crisis is captured well by Stoller. It's probably not the sort of film people will return to the way they have with the more consistent Superbad or the more well-observed The 40 Year Old Virgin, but it's already proved a hit with audiences, so don't be surprised to see a sequel. 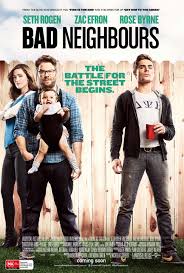 A couple with a new baby get into a dispute with the frat boys who have moved in next door.