A shameless fusion of Sacha Baron Cohen’s Borat schtick with Johnny Knoxville’s own Grand Theft Parsons via Harmony Korine’s Trash Humpers, this latest Jackass product is sure to go down well with their fans but often feels about five years too late. Many of its set-pieces are undeniably crudely funny, but satire it ain’t: then again, it doesn’t have any pretensions to be, and it boasts a stronger, sweeter narrative than Cohen managed with his mock-doc efforts. It’s also enlivened by breakout star Jackson Nicoll, the child actor playing the adults around him like he’s a seasoned pro and they’re the proverbial fiddle, his mischievous antics often eclipsing Knoxville’s gross-out gags.

86-year-old Irving Zisman has just lost his dearly beloved wife - and is overjoyed to be back on the market again. The last thing the old coot needs is his crackhead daughter going to jail, leaving him to ferry his eight-year-old grandson Billy across the country to his loser father. Initially frustrated by the perceived burden, Irv and Billy soon form an unlikely friendship, when the horny geriatric realises the kid is an powerful pulling accessory. Along the way they get into various scrapes but also share some life lessons together, leading Irving to face some tough decisions as to whether to follow his heart or obey his pecker.

To really hit the mark, this kinda fly-on-the-wall comedy depends not only on the covert actors and situations they've cooked up, but on the extremity of the victims' reactions. Interestingly, the view of Americana proffered here in this regard is much more positive than Cohen’s; most of the be-pranked respond to the situations with genuine concern and humanity, and their stupidity isn’t emphasised the way it was so brutally by Borat and Brüno. Even a crucial sequence featuring a biker gang – which has the potential to be as explosive as Bruno’s climactic homophobe-baiting cage-‘fight’ – ends up being somewhat heart-warming, and most of the unwitting participants’ interactions highlight not only how gullible Americans can stereotypically be, but also how open and accommodating.

Aside from the Baron Cohen influence, it’s slightly disappointing how many of the gags have been recycled from obvious sources – Scary Movie-esque dangling scrotes rub up against Weekend At Bernie’s-style corpse-comedy and the afore-mentioned Trash Humping (though there’s a definite chicken and egg dynamic between Jackass and Korine, with Gummo arguably influencing the collective in their early days, and their antics no doubt inspiring part of Trash Humpers’ style in turn). For all that though, there’s enough variety to the set-ups and pay-offs – as well as a surprising amount of quotable spark to the dialogue – to frequently catch even sceptical viewers off-guard: there are a few sequences that will prove too much for some, but equally you're guaranteed to be clutching your sides at some point.

Anyone who’s seen the trailer – which would be everyone who’s been to the cinema in the past couple of months – will unfortunately have seen the visual punch-lines of the best set-pieces already. This is a perennial problem for comedies, but it’s especially tragic here; the trailer even ruined the show-stopping finale by showing it almost in its entirety. In compensation though, there are plenty of uproarious moments that were too disgustingly adult for the trailer, and the endearing central relationship keeps things ticking over.

The dynamic between Knoxville and Niccoll is definitely the film’s trump card, and both of them excel in exponentially bittersweet roles. The attempt to inject a little genuine feeling into Irving’s eventual ‘do the right thing’ attitude actually comes off too, making the finale a perversely uplifting, bond-sealing experience that makes its exploitation of Nicoll easier to swallow. The writers can’t resist under-cutting his happy ending with some desperately jarring gallows humour, but there’s an affecting streak of childish joy to the antisocial mischief that in retrospect makes much of the questionable behaviour kinda forgivable, and the out-takes highlight just how much irresistible fun this must have been to make.

It's never going to convert Jackass/Knoxville naysayers, and the lowest-brow jokes and scatological sight-gags will be off-putting to some, but Bad Grandpa is a guiltily enjoyable slice of outrageous fun the likes of which we haven't seen in a while. It's as hit and miss as all of director Jeff Tremaine's stunts - and Spike Jonze's surreal sensibility is nowhere to be seen, despite his writing credit - but its good nature sees it through, and Knoxville and Nicoll make a great double act, even finding time to shine in the proper acting stakes as well. 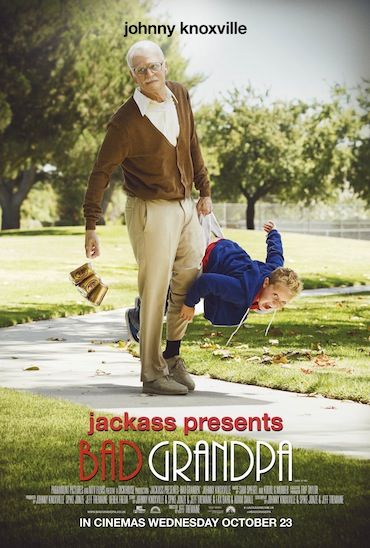