DA Pennebaker's second short film, Baby, is radically different from his first, Daybreak Express, but like that film, it shows the early signs of the style he would grow into. While Daybreak Express demonstrated his poetic side and an ability to marry imagery to music, Baby shows him learning to go with the flow and capture the moment in a way that is evident in later films such as Lambert & Co and Don't Look Back.

Shot in black and white, the film was intended to be a structured tale of his two-year-old daughter Stacy wandering around Central Park Zoo with a balloon while being watched by the animals. In what turned out to be a happy accident, she had other ideas about what she wanted to do with her day (read about that on his website) and, rather charmingly, large chunks of the film are spent with Pennebaker seemingly trying to keep up with the toddler as she dashes off.

The film comes into its own when Stacy gets on a carousel, along with her dad, who captures the moment - the first time she had ridden one - not just be observing the look on her face but by filming us what she sees and immersing us in other details of her body language, such as her dangling feet. By doing this he not only shows her but gives a vivid sense of what it feels like for her, documenting the heady rush of new experience in a way that feels as natural as the bobbing of a balloon on the wind. 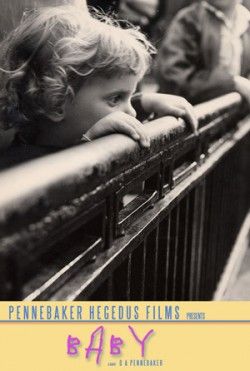 A little girl's day out at the zoo.