Christmas comes early this week - presumably to outfox Alvin and his seasonal Chipmunks - as Aardman's latest animation aims to sleigh you at the cinema. This simultaneously cool and cosy tale of families and Christmas spirit will have the animation company's pockets jingling all the way to the bank. And deservedly so.

Here Santa is a regular family guy - and quite some distance from being saintly. He comes from a long line of Santas and, in an early indication that the film will be wholesome but not saccharin, it's interesting to note that at least one of his forebears had a tragically short life.

It's almost Christmas and his family are making preparations. In a comfy corner of the North Pole, Santa's teenage son Arthur is scribbling away replies to Santa's letters. A true believer in the magic of the season, he "just wants it to be perfect" for everyone. Perfection of an altogether different sort is on the mind of his older brother Steve, however. Santa's heir apparent runs a crack squad of elves - think Special Weapons And Presents - from a command centre that could rival James Bond.

We are plunged into the action as, on Christmas Eve, Santa's super-sleigh goes into action, with thousands of elves rappelling into homes across the world with gifts galore. It's an extended sequence so full of sight gags that it's sure to be the gift that keeps on giving for multiple viewings.

Even technology can fail, however, and when "gift wrap support elf" Bryony discovers a toy that has missed the drop, it spells trouble for Santa. Steve is happy to write the mistake off with statistics and even Santa seems too tired to lose any sleep... But Arthur and Bryony are determined that no child should be missed and enlist the help of Grandsanta, his mothballed sleigh and a team of reindeer to attempt to deliver the pressie before little Gwen, in Cornwall, wakes up on Christmas morning.

The trajectory of this story may be similar to many Christmas tales, as an unwitting hero saves the day while lessons are learned, but debut director Sarah Smith, showing amazing flair, and co-writer Peter (Borat) Baynham keep the comedy fresh and the situations as realistic as they can be considering they involve a Rudolph with cataracts and a neck cone, and a lot of magic dust. The absurdities of regular family life - such as musical reindeer slippers that make you slip around, sibling rivalry and annual rows over board games - are revelled in as much as action sequences involving lions and the city of Toronto. The voice talent is excellent, from James McAvoy's naive but genuine Arthur and Hugh Laurie's stuffy Steve, to Bill Nighy's grumpy grandpa and Ashley Jensen's scene-stealing Bryony.

While the world panic caused by Arthur's "UFO" sleigh feels like the unnecessary bauble that might break the branch - and the film will work just as well in 2D if you're looking to save a few quid - it's a tiny quibble with a glowing tree of a Christmas movie destined to be a staple of family viewing for years to come.

And if Bryony's catchphrase "there's always time for a bow" hasn't passed into general usage by Hogmanay, then there is no justice (or Santa Claus). 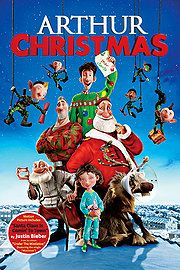 After a present is missed on Christmas Eve, Santa's son tries to deliver it.

Flushed Away
The Santa Clause 2
Wallace & Gromit: The Curse Of The Were-Rabbit