Brandon Cronenberg, son of The Fly director David Cronenberg, was never going to avoid the 'chip off the old block' catcalls when he announced he was working on a debut film Antiviral. His plan appears to have been to embrace the expectations full-on, and the end result feels like it could come from what one might call the Cronenberg stable, or at least the David Cronenberg of 30 years ago (he seems to prefer more psychological rather than physical investigations these days). As a first feature, it may not be totally surprising or very subtle, but it does have some impact, particularly visually. As for Brandon stealing concepts and style from his father - well, its not like Cronenberg senior is making films like this any more, so the space is vacant. If you are going to steal, steal from the best, especially if the best is your dad.

A sterile and cool body-horror satire of modern celebrity culture that is all about letting the camera linger on close ups of surfaces - of skin, machines, carpets, glass - Antiviral is set in a soulless world where the cult of celebrity has reached absurd levels of infiltration into people's lives, to the point where it literally pierces the skin.

We are swiftly introduced to our central character, the deathly white and lizard-like Syd March (Caleb Landry Jones, who looks like a younger Brad Dourif). Syd works for The Lucas Clinic - a company which reaps a tidy profit by infecting willing clients with viruses taken from their favourite stars. We learn this is one of many major new social and cultural trends in a world which is in thrall to hyper cults of celebrity, where biotechnology is harnessed not to better the health of mankind but to bring people closer to their obsessions through physical alteration - or degradation. In the first scene in which we see Syd, he is alone with a nervous client in a spartan and very clinical room in the Lucas building, stoking his clients desires with words of understanding as he offers up a selection of viruses, vials neatly packaged in sleek black cases. TV screens dotted on the walls relay a constant stream of 'invasive journalism' - endless reports of stars suffering from anal infections, genital deformations, and obscure viral outbreaks. Welcome to what is presumably the near-future.

We soon leant that Syd isn't just a smooth operator in this commercial world of desired infection, he is also earning a little extra cash on the side by using his own body to smuggle out popular viruses from celebrities, selling them to shady pals operating stomach-turning celebrity branded food stores (where the grotesque products - steaks, cakes, beef jerkies - are in fact grown from cloned cells from the stars themselves). But Syd is not immune to the same obsessions that drive his clientele, he too is harbouring a fascination with the Lucas Clinic's star product - the super-model Hannah Geist (Sarah Gadon, who also worked with Cronenberg senior on A Dangerous Method and Cosmopolis). Syd finds himself in danger not only of dying, but of being harvested for his own blood after he infects himself with a deadly pathogen taken from Geist, who has herself fallen victim to an viral assassination attempt.

Cronenberg certainly has visual and technical flair and a knack for locating the audience's queasy buttons, as well as capturing the tangible and mutable nature of organic surfaces- there are plenty of shots of forearms pierced by needles, ruptured skin surfaces, liquid oozing, and biomechanical fusings. The film's most intriguing aspect, however, is not the production design or the stark and striking cinematography, but the weirdly intense performance from the very odd and very pale Jones.

The concepts and themes batted about are not particularly complex or subtly put (do we really need to be reminded that celebrity fixation and worship is a sickness?), leaving Antiviral as a more intriguing, blackly funny and sensuous experience rather than a thrilling, thought-provoking or disturbing one. The plot is perverse and ridiculous, but the experience does linger... and fester. 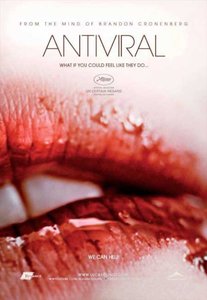 In a future where people pay to be infected with the same diseases as their idols, a dealer races to find a cure after a starlet whose illness he has stolen dies.