Historical dramas have a habit of falling rather awkwardly into a neither fish nor foul category that leaves you wondering which parts are fact and which are embellishment. Debut director Marc Dugain - adapting and directing from his own novel - avoids this problem by taking a real person, Russian dictator Joseph Stalin, and setting him in an almost purely fictional narrative. This allows Dugain the freedom to explore what makes a dictator tick, rather than to get hung up on trying to slavishly recreate the last few months before Stalin's death. The fact that this is a French film about Russia also frees the narrative up, stripping out any need to reference modern politics that might spring from a film made locally, so that it becomes focused almost entirely on the characters and their motivations.

What is conjured up instead, is an atmosphere of fear so thick that is hard for any of the characters to see past the preservation of themselves. Stalin has "purged" all the Jewish doctors in the State and finds himself in increasingly ill health. Desperate for any sort of respite, he turns to Anna, a young doctor who has built up an impressive and dangerous reputation for herself - not to mention a long list of enemies - by being able to heal people without using traditional medical methods.

She is met from work by the sort of shadowy types that have 'come with me to the Gulag' written all over them and finds herself having to listen to Stalin's twisted philosophy while ministering to him. Intensely paranoid, Stalin at once insists she leave her husband, but it's clear he's unlikely to stop at that and the doctor soon finds herself helplessly caught as the old man grows sicker.

Often, debut features are marked out by interesting direction but problematic scripting and here, the problem is something of the reverse. The direction is little more than workmanlike and the budget limitations show, although Yves Angelo adds a sickly bleakness to his colour palette that feels as beaten down as the film's characters. In narrative terms, however, Dugain completely captures the sense of Stalin as being utterly mad in his "sanity", as one character says early on: "Stalin has his own logic."

The dictator's cold and almost throw-away disregard for human life is enough to inspire a sharp intake of breath, such as when, while being aided by Anna, he proceeds to pepper the conversation with details of her husband's torture. It is the casual nature of his cruelty that makes this film such a compelling watch. The presence of the word "ordinary" in the film's title nods to Stalin's indifferent attitude to those he kills, while his own quote, "The death of one man is a tragedy. The death of millions is a statistic", at the end of the film is a stark reminder of his offhand attitude to slaughter.

André Dussolier (MicMacs) is perfect as the Russian despot, managing to convey the sense of someone physically fragile at the same time as inspiring constant dread, while Marina Hands (so good in Lady Chatterley) is utterly compelling as the resourceful Anna, trying to retain her sanity against overwhelming odds. Now and again there are signs of Dugain pushing things too far, such as an unnecessary shoe-horning in of a reference to Vladimir Putin, but overall this is a gripping drama setting an examination of the nature of love in sharp relief against the characteristics of megalomania. 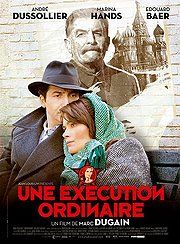 An imagined encounter between the ageing Joseph Stalin and a young doctor with extraordinary healing abilities.

The Lives Of Others
Pete On The Way To Heaven
Taurus