Starting life as a story picked up by community radio, All Of Me (Llévate Mis Amores) is a warm tribute to a group of women in the small village of La Patrona in Central Mexico. An estimated two million migrants cross the border from Mexico into the US each year. The freight train known as 'The Beast' - central to the dangerous route taken by many of those migrants - passes through the village, and since 1995, the women have been attempting to feed the hundreds of stowaways onboard by throwing bags of cooked food and bottles of water onto the moving train. They offer a lifeline for those migrants.

The women - known as 'Las Patronas' [the (female) bosses] - themselves live hand-to-mouth existences in an area beset with low wages and limited employment opportunities. Each has had their own potential curtailed by circumstances beyond their control and all hope for better for their children - they understand first-hand why the migrants take the risk that they do. In a series of in situ conversations, director Arturo González Villaseñor invites the women to talk about their lives and personalities in their own words, creating portraits of female resilience (the absence of men is a common factor in many of the women's lives) in the face of hardship and tragedy. They describe themselves in humble terms but their warmth and sincerity infuses both their actions and the film itself - these are admirable women who have dedicated themselves to a particular task (the scale and logistics of which are impressive) with tenacity and a heartfelt empathy for those fleetingly passing through their village.

This is a dangerous situation for all concerned. The migrants risk death or mutilation travelling on a high speed train with little safety - falling asleep can be fatal - and there are several stories within the film of Las Patronas having to deal with the aftermath of people falling off the train. At the same time, the women risk physical injury either by being pulled towards the train as those onboard grab the bags of food or when scores at a time jump off the train in order to ensure they get a share of the supplies (several of the accidents have occurred when those people then attempted to get back on to the moving train).

But the danger for the women is also a legal one, as in 1995 (the same year that they started) it was made a crime to assist illegal immigrants - they started with 25 women but now only have 14 (most of whom are related to one another) as people dropped out for fear of arrest. In investigating their own legal position, Las Patronas came into direct contact with the authorities and have effectively become advocates for the migrants - while the women observe the legalities, they also insistently argue that the authorities should treat everyone with respect.

While the local community contributes what they can in the form of food and clothing donations, the responsibility and credit for what they have achieved rests with Las Patronas. Pleasingly, their efforts seem to have had a reciprocal effect in their lives - many of them have received a confidence boost and an emerging sense of self-fulfilment in knowing that their actions make a difference to the lives of hundreds of strangers on a regular basis. In All of Me, González Villaseñor has given these women a voice of their own and constructed a merited tribute to their determined generosity. Recommended. 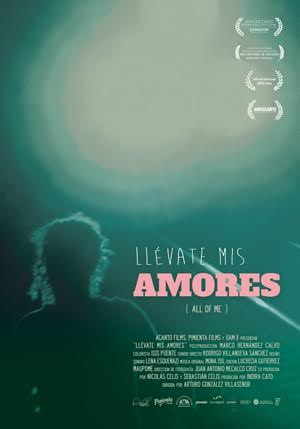 Every day since 1995, a determined group of women have been using all their resources to feed hundreds of migrants passing through La Patrona, a small village in Central Mexico.