Alexander Sokurov is not known for crowd pleasing. His movies have a tendency to unfold at a pace that wouldn’t shock a snail and deal with big canvas issues facing Russia, such as the last days of Lenin (Taurus), or a single take meander through his country’s history (Russian Ark). His latest is no exception – and his ponderings on the effects of war become distinctly ponderous.

An elderly grandma (Galina Vishnevskaya) visits her grandson (Vasily Shevtsov) on an unnamed army base – where this is situated is never made clear from the narrative, although doubtless Russians would divine the setting from the accents (the press notes indicate it is Chechnya). While she is there, she wanders the base, chatting to soldiers and generally making a bit of a nuisance of herself. She briefly leaves its confines and slips into conversation with a group of local women.

Doubtless some will say this is a triumph in its exploration of the sameness of war the world over - the bored youths, the dusty encampments, the lack of purpose.

Personally, I found it incredibly hard to care about either the grandmother or the young men and, since there is no plot to hold your interest, torpor ensues. 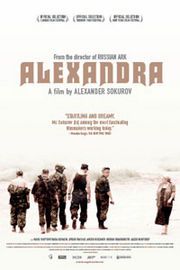 A grandmother goes to visit her grandson, working for the army in Chechnya.