Fiction that borders on documentary and vice versa have become cinematic staples in recent years but Pedro González-Rubio muddies the waters more than most in this gentle, observant study of the bond between fisherman and ocean and father and child.

He casts real-life father and son Natan Machado Palombini and Jorge Machado as the central pairing in his film, but places them in semi-fictionalised circumstances in which Jorge goes to live with his father and grandfather (Nestór Marín - who is not related to them in real life) in a stilted hut in the ocean as an extended holiday farewell before heading back to the city with his mother. The result is an incredibly intimate portrait both of a way of life which is, if not disappearing, then certainly under a certain amount of threat from the modern world and of the ties that bind families together.

Presumably the fictionalising of the story offered González-Rubio more freedom in terms of shaping the narrative, but he has such a gentle touch that you would be hard-pushed to spot the artifice. Because the relationship between Natan and Jorge is a genuine one, González-Rubio is able to capture the authentic emotional bond between the two of them even if the situations - a trip diving for shellfish, an incident where the little one is warned about a crocodile - may be to an extent guided by a directorial hand.

The relationship between Natan and his own 'father' never hits a false note, either, largely because their relationship is defined by their immediate environment, the sea, which sees them bond over fishing techniques and the like rather than the director inserting 'family' detail, which might cause the viewer to question what is real and what is not.

Shot in an unfussy, unobtrusive style, events - whether orchestrated or not - play out in a believable fashion, with ambient sound, such as the crash of the waves and the creak of the hut all adding to the sense of verisimilitude. González-Rubio expertly captures Jorge's childlike enthusiasm and inquisitiveness for the little things others might take for granted, such as the opportunity to befriend a white egret, they name Blanquita, and to experience the exhilleration of her company as well as the sorrow when she disappears. Older children, who liked Crimson Wing and Earth, will doubtless find much to enjoy here, while adults will be drawn to the more grown-up themes of love, separation and interconnection. 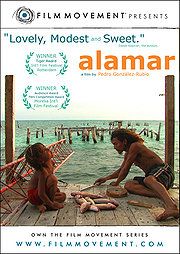 Fathers and sons, and fishing.