A family emergency - and the related absence of their parents - means that siblings Omar (Sebastián Cobos) and Karina (Valentina Buzzurro) must make a fraught 2,500 kilometre journey across Mexico on their own. Already out of their natural urban habitat on a holiday at the coast, the brother and sister have their eyes opened to Mexico's unsettling realities as violence forms a persistent backdrop to their progress.

Their cosseted existence at home in Mexico D.F. is indicated in their naivety in dealing with the various interested (male) adults with whom they cross paths. The elder of the two, Omar is nonetheless usually oblivious to the lascivious looks many of these men direct towards his prepubescent sister and to the danger that the siblings place themselves in through a combination of both being too trusting in certain situations and blithely issuing orders in others. This combination of immaturity and arrogance is also manifested in the lack of discretion they show in terms of what they say in front of strangers, apparently unaware that there are some people who you would do well not to mock.

The film develops into a 'series of unfortunate events'-style narrative wherein the siblings encounter one untrustworthy adult after another. This sets up a feeling of suspicion when anyone comes to their aid (even when later characters demonstrate appropriate levels of concern for the youngsters' safety), which is perhaps required to make the two siblings slightly more street smart but - although the drunken photojournalist, proud indigenous man, and the unhinged and over-sexed truck driver are clearly delineated characters - it makes the film quite episodic and perhaps longer than it needs to be as a result.

More effective is the tapestry of violence negotiated by Omar and Karina as they travel to their grandmother's house. It forms a constant backdrop and soundtrack - whether in the form of military roadblocks, protests in response to massacres by narcos (and the photojournalists graphic photos of the dead bodies), TV news reports, a mutilated corpse hanging from a bridge, or an uncommented-on pillar in a bus station that is papered with missing persons posters. That most of these things are not discussed by those onscreen implicitly positions them as 'reality' in modern Mexico.

Another strength is the way in which home movie smartphone footage of their holiday is interwoven into the film. Rather than just being a gimmick, it allows the film to segue from the children's current situation into flashback via a form of either daydream or memory (triggered by watching the images on the phone). The footage explains what happened to their mother and the events that led up to this unaccompanied trek - the way in which they have been wrenched from their family (or one could argue, simply abandoned, by their father) is another form of underlying violence to the story.

Dedicated to director Alejandro Gerber Bicecci's sister, A Separate Wind (Viento Aparte) depicts a realistic sibling relationship with petty squabbles and irritations that are nonetheless put aside when a third party threatens either of them. Newcomers Cobos and Buzzurro both acquit themselves admirably given that they effectively have to carry the film with no prior experience, and the believable relationship that they perform holds the film together through its episodic nature. 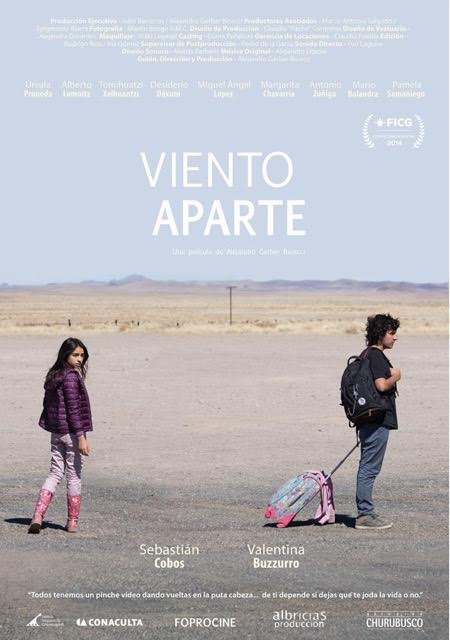 A young brother and sister have to trek across Mexico after their mum suffers a stroke.