Inevitably any version of Charles Dickens' enduring tale is haunted by the ghosts of adaptations past. Even younger viewers are liable to have seen either the lacklustre, though starrily cast, Simon Callow-led Christmas Carol - The Movie or Michael Caine's magnificent Muppet Christmas Carol. Thankfully, this latest presentation - which sees Jim Carrey giving voice to most of the main characters - is closest in spirit to the Brian Henson version, while having a few 3D tricks up its sleeve.

This is a faithful retelling of the story, with no additional characters or subplots to clutter the narrative, proving that strong tales such as these are better off without embellishment. The enhancements here come, not to the source material but to the look of the film, which is beautifully rendered in immersive 3D. And if you're going to have 3D, then falling snow is the perfect weather to accompany it, drawing the viewer into the action. Robert Zemeckis also chooses to give us a close up look at the main characters, a move that lets us really appreciate the animation craft that has gone into rendering Scrooge down to the last pore - although some of the subsidiary characters, in particular, Scrooge's lost love and Tiny Tim, do end up looking rather expressionless by comparison.

As for the miser himself, in keeping with American traditions that can probably be laid at the feet of a certain duck, he has a slight Scottish twang, with Carrey channeling the spirit of Victor Meldrew to realise the old curmudgeon. In fact, you quickly forget that the man behind The Mask is the man behind the mask and those who do not know beforehand may be surprised to learn that he also provides the voices for the apparitions who visit the old man.

The spirits stick rigidly to the Dickens' script, although the Ghost of Christmas Past - represented by a candle - is given a somewhat irritating whispery Irish brogue and one too many visual tics. Better, are the Ghost of Christmas Present who, with his hearty laugh and rapidly greying beard, hoves from Lancashire, and the Ghost of Christmas Yet To Come, who remains a shadowy, silent and sinister messenger. The nocturnal visitors themselves, however, are less important than the ride they take Scrooge on, with Zemeckis wasting no opportunity to take him and the audience on a whistle-stop journey across the rooftops of 1840s London, with stop offs in the streets and sewer system.

It is here that the animation is at its finest but, for once, these wild flights, despite being set pieces, are included as part of the story, blending with it and providing an action counterpoint to some of the more sombre and spookier parts of the narrative. Equally, the ghost and spirits are given just the right amount of peril so that older children will find them suitably scary at the time but not so much that thoughts of them linger long past bedtime.

It is true that it lacks some of the humour and warmth that Henson and Jerry Juhl brought to the muppet movie, but this Christmas Carol has charms of its own and is mercifully free of cloying sentiment that has marred other versions.

There will be those who may feel Dickens has been done to death - but shouldn't there always be room in cinemas for well-told family stories with morals we can all buy into? Too traditional? Bah humbug! 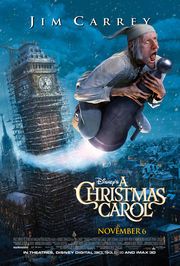 Charles Dickens tale of Christmas spirits gets a 3D makeover.

Writer: Robert Zemeckis, based on the story by Charles Dickens