Another perhaps unnecessary sequel initially falling back on meta-mugging, 22 Jump Street eventually hits its stride in ways that might make it even more guiltily-pleasurable than its predecessor. Where The Lego Movie team Phil Lord and Chris Miller eventually got lost in straight-up action before, the laughs and ingenuity are more consistent through to the finish here, after an admittedly shaky start. As scattershot as Anchorman 2 but with an agreeably soft core once more, it's ideal summer entertainment, with sterling work from Hill, Tatum and especially Ice Cube ensuring the laughs come thick and fast enough to paper over the cracks of familiarity.

Having cleaned up a drug-riddled high school, underdog rookies Schmidt and Jenko find their Jump Street program stalling when they're trying to infiltrate more grown-up gangland rings. With Captain Dickson back on their case, the pair are sent undercover to college to try to trace the dealers behind a spate of recent student overdoses. Despite looking noticeably older than their peers, they soon find cliques willing to accept them; nice-but-dim Jenko finally gets to embrace his jock side, while Schmidt immerses himself in the art set in order to pursue the gorgeous Maya. With the distance between them growing by the day, their relationship as partners and even friends is tested to the limit, while the culprits they're chasing may be right under their noses.

The similarities to other recently deemed unnecessary but actually surprisingly funny sequels like Muppets Most Wanted and Anchorman 2 run beyond mere indulgent run-times (although 21 Jump Street could have done with being 20 minutes shorter too); the strain of ironic meta-humor here acknowledges redundancy from the off, while the supporting cast are gifted more scene-stealing moments than the previous bromance at the center of the story allowed. Ice Cube in particular has never been better, banishing the inexplicably successful Ride Along from mind with a hilariously furious turn that - despite unashamedly reveling in anti-honky racism - reminds you just how righteous and self-deprecating he can be, often simultaneously.

The in-your-face self-awareness does thankfully subside early enough to prevent cloying, letting the script's repetition of the predecessor's formula become the most subversive - even brave - running joke. A sequel to a remake of a TV show having its cake and eating it? It's to Lord and Miller's credit that this doesn't feel lazy, and to Hill and Tatum's that their characters feel expanded without jeopardising the odd couple chemistry that fizzed so delightfully before, despite them being separated for much of the duration.

As their distractions and foils, Wyatt Russell and Amber Stevens work well, the former coming off as an amiable cross between his father Kurt and a young Owen Wilson, while the latter imbues her potentially cheesy beauty-with-brains role with a real sense of both feminist pride and frustration with the opposite sex's empty advances. Following solid work in the US We Are What We Are, it's great to see Russell step up to a more substantial role - he's genuinely charming in a way that's completely removed from his father's appeal - and while Stevens might not be believable as a love interest to the slimmer but still slovenly Hill, her doe eyes betray smarts and feistiness that should see her go far.

Peter Stormare, Rob Riggle and cult heroes The Lucas Brothers offer solid support, with even Richard Grieco's cameo proving amusing. Once again, Channing Tatum proves more comically adept than his pretty-boy status might suggest - is there anything he can't do? - while Jonah Hill proves he has more dramatic heft than his schtick usually allows, his pining for his wayward partner proving touching throughout. The only duff note comes from comedienne Jillian Bell, an awkward one-note psycho-bitch cliché whose sole purpose seems to be giving Hill the excuse to punch a woman in the face. Not cool.

As with The Dictator, it's refreshing to see a comedy that doesn't blow its wad prematurely, instead building from a weak opening to become progressively funnier and more engaging as it goes along. Between this franchise and animated hits like Cloudy With A Chance Of Meatballs and block-busting (excuse the pun) product placement satire The Lego Movie, Lord and Miller are crafting a formidable filmography that surely wouldn't even be damaged by another jaunt down Jump Street (especially if it's as sublimely silly as their mid-credits teasers - don't dare leave til you've seen them all). They're inventive enough as directors to steal the more sitcom-ish Judd Apatow's comedy crown if he's not careful, which given his recent output might not be a bad thing. 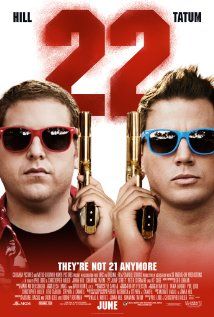 Schmidt and Jenko go undercover at a college.