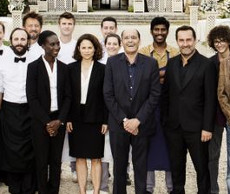 The 23rd edition of the festival will screen at the Film Society of Lincoln Center from March 8 to 18. The festival will open with Mathieu Amalric's Barbara, with the director and star Jeanne Balibar in attendance. Other guests expected at the festival include Xavier Legrand, Marine Francen, Gilles Bourdos and Bruno Dumont.

In addition to the films, which also include C'est La Vie! and Custody, there will be free talks on First Films and Women, Work And The Will To Lead, held at the Elinor Bunin Munroe Film Center.

The Workshop
An exploration of group dynamics in a young people’s writing workshop.

Woman Up!
An ambitious woman treads a dangerous path as she attempts to crash the corporate boys’ club.

Jeannette: The Childhood Of Joan Of Arc
Musical about the French heroine.

C'est La Vie!
A night of surprises unfolds at a wedding party in a chateau.

Custody
A couple embark on a bitter custody battle for their son.

Barbara
Filmmaking and real life start to blur for a director making a biopic about female singer Barbara.

The public Eye
C'est La Vie! star Haïdara on the art of comedy, her rising career and fighting racial stereotypes
Deepening the mystery
Mathieu Amalric and Jeanne Balibar on Barbara and Balibar's Merveilles À Montfermeil
Filming sensations
Mathieu Amalric on Pierre Léon, Jeanne Balibar and the sounds and colours of Barbara
Being in a timeless state
Bruno Dumont on Jeannette, The Childhood Of Joan Of Arc and filming the natural world
Jeanne’s love affair with Barbara
César best actress Balibar on becoming a musical legend in Barbara
Discovering and forgetting
Jean-Paul Civeyrac on Novalis, Flaubert, Pasolini, Rose Pourquoi and A Paris Education
Meeting the Maid of Orléans
Bruno Dumont on Jeannette, The Childhood Of Joan Of Arc
La difference
Tonie Marshall on Woman Up! and the barriers facing women in France and the film industry
Celebrating French cinema
Serge Toubiana on the Cinémathèque Française and his new role at uniFrance
New York Rendez-Vous With French Cinema early bird highlights
Montparnasse Bienvenüe, Barbara, A Paris Education and Jeannette, The Childhood Of Joan Of Arc
Legrand’s Greek tragedy for our times
Debut director tackles a family at war
Baye displays a mother’s pride
The Guardians star on Beauvois, Hallyday, and working with her daughter