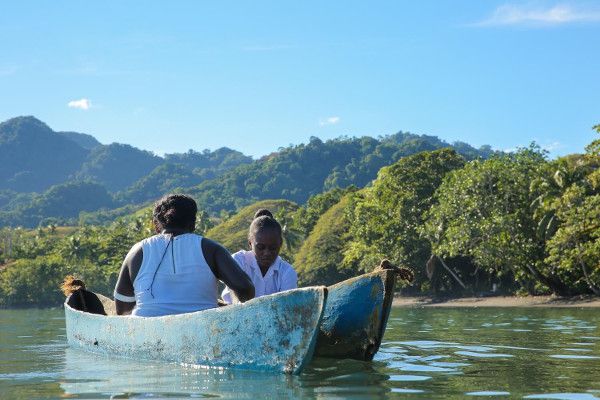 The second edition of Scotland's premier film festival celebrating the work of female directors, with a small but meaty programme of features and shorts.

The festival was based around three themes - It’s Complicated (a deep-dive into the complex and nuanced experiences of the relationships womxn have with one another), Collective Memory: Trauma & Nation (stories that explore the power of memory) and Autonomy (films of different personal struggles, enquiring into what happens when the right to self-determination is reclaimed). It included work by filmmakers from Burkina Faso, New Zealand, Costa Rica, Kenya and Germany.

The festival runs from 20 to 23 February.

Duck Daze
Johnina gets revenge on her childhood abuser and the community that enabled him, with the help of a duck.

Glue
A woman waits to meet her ex for the first time since their break-up.

Moments Of Resistance
A documentary which reflects on the connections between historical resistance and the current political landscape. It amplifies the voices of politically engaged womxn and fosters hope for solidarity and inclusion.

Meet Me By The Water
In a small fishing town on the West Coast of Scotland a young Asian woman must decide whether to leave home and family for a new life in South America.

Overseas
A documentary about a learning centre where women hoping to find domestic work abroad prepare themselves what for what lies ahead - including homesickness and potential abuse.

I Told My Mum I Was On An R.E. Trip
An exploration of issues around abortion, based on real-life interview recordings.

Little Miss Westie
Story of Ren, the first out transgirl to compete in the Little Miss Westie Pageant. Coaching her through the competition is her older brother Luca, who previously took part in the pageant when he lived as a girl.

In Search...
Documentary about the lasting trauma of female genital mutilation and the filmmaker's reconstructive journey.

Nîpawistamâsowin: We Will Stand Up
In 2016 Colten Boushie, a young Cree man, was killed in Saskatchewan. This documentary explores the case and shines a light on the vast inequality and systemic racism within the Canadian legal system.
A-Z of Femspectives 2020 reviews >>>