The Goose Steps Out

Studiocanal have collected together an interesting set of extras for this 75th anniversary release. There's plenty of background detail on Will Hay offered by a comprehensive interview with his biographer Graham Rinaldi - who takes us through his career up to and beyond The Goose Steps Out - and an equally thorough BBC Radio 3 short programme, narrated by Simon Heffer, about the star.

Also included is Ministry of Information short film Go To Blazes, which sees Hay star as a father who finds its his wife (Muriel George) and daughter (Thora Hird) who are best equipped to deal with an incendiary bomb falling on their house. This is fascinating not only because of the insight it gives into the way the Government tried to spread information at the time, but because it is one of Hird's earliest performances. 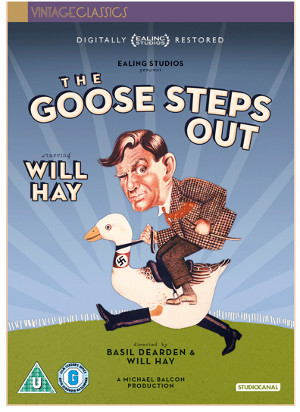 A teacher agrees to spy in Germany after it turns out his is the doppelganger of a Nazi.