Terry Jones's commentary is sympathetic and interesting. He admits that Sullivan's Travels is one of his favourite films ever, yet stops short of sycophancy. He makes the point every now and again that a particular scene was perhaps overdone, like the manic behaviour of the studio staff when their "land yacht" is involved in a car chase - I have to admit that I found this hilarious - although, in fairness, he equates it with a Keystone Cops-type chase, parodying slapstick.

He insists throughout that "nobody is playing to the comedy". It's the subtlety that grabs you. Sullivan smiles maybe twice in the entire movie. When he does try to be the tramp and inject a little humour, he fails. Deliberately so.

"It is his sincerity and gravity that hold the film together," Jones says.

The director and one-time playwright Preston Sturges is devilishly clever and nothing is quite as it seems, or there is a moral being subtly played out that may only become clear later. But let me assure you now, this movie is entertainment. Sturges's method of putting out a message is too understated to ever be boring.

Typically, Jones adds, Burroughs the butler has one of the smallest parts in the film, yet he is like the Greek chorus, describing exactly what poverty is - a powerful speech in the mouth of this minor, though fascinating, character, which is true for all the bit-part players. The 13-year-old driver in the car chase, from whom Sully thumbs a lift, somehow brings his own world into the film just by his presence and a few words of dialogue.

In Veronica Lake's first scene, when she and Sullivan, now a supposed tramp, meet in a down-at-heel diner, Jones reminds us that this would-be Hollywood star, this failure, is already acting brilliantly. It's clear that Sully is interested in "the girl", not only for her loveliness, but also as a movie director, which, of course, he is beneath the disguise.

When they illicitly climb aboard a freight train, the two tramps sharing the straw bear out Burroughs's message that the poor resent the invasion of their privacy. In this scene any other director would have had the romance take off, as they trundle through the night. At most, we are shown how comfortable Sully and the girl are with each other and how transparent they appear to the real tramps, who jump off in disgust.

It must be clear from this truncated version of what Jones has to say that Sturges's genius is in his writing. He spoons on the cream with a plot that twists and turns and surprises. By the end, we can all share the simplest of conclusions: "There's something to be said for making people laugh. It might be all they have." 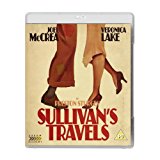 Hollywood film director dresses up as a tramp to experience how the other half lives.