It's a testimony to how dear this is to many fan's hearts that Studiocanal have gone the extra mile to include fresh and interesting extras on this Blu-ray and DVD release.

Alongside a handful of stills from the film the meat of the extras come in two featurettes - A Restless Retrospective: Creating A Caledonian Classic feature and Soundtrack For A Not-so-big-country: The Music of Restless Natives feature. They both feature extensive contributions from director Michael Hoffman, writer Ninian Dunnett, executive producer Andy Patterson, star Vincent Friell (who plays Will) and Big Country guitarist Bruce Watson. There's plenty of the what fans will want here - anecdotes about how Ned Beatty was hired, about the locations and about the development of the score. Watson's recollections about their move into score writing also provide an insight into the physicality of the process as it was back then. The only disappointment is that they couldn't get a few more of the stars to contribute, but what's here is entertaining in its own right and so bang up to date they even reference Brexit.

Additionally, there is a commentary track featuring Patterson, Hoffman and Dunnett. It offers some additional details about the way the film was shot, along with some technical details, including problems with the light. The anecdotes flow freely, and Hoffman's enduring love of the film and its performances shines out. Dunnett seems a wee bit sour compared to the other two, taking time to have a potshot at Bernard Hill's accent (not that it is unjustified), references to Scots money and changes to the script.

All in all, a strong addition to the Studiocanal Vintage Classics label. 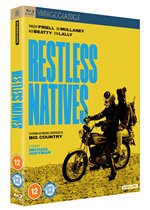