DVD commentaries can be a form of egocentric window dressing for directors and actors. Here you have writer/director Maya Forbes, her producer husband Wally Wolodarsky and Mark Ruffalo doing the talking. Too many, you might think, especially a husband and wife team squabbling over details and a famous actor chipping in with self-deprecating anecdotes. Far from it. The opposite is true.

Maya dominates. Mark keeps quiet and Wally complements the conversation with verbal nods. No matter. What you learn is how the film was made and why and what a close-knit affair it turned out to be.

Anyone considering a career in homegrown film making will learn loads from this, although Maya's film is so autobiographical it fits into a special category.

Because they had so little money, they could not shoot in Boston - too expensive - nor use sets - the locations and interiors were real places and genuine apartments. Maya and Wally's daughter, Imogene, played Amelia, extremely well as it turned out.

The cars kept breaking down and the crew was scared of Mark's driving. Family members were dragged in to play small, relevant roles and Maya's sister wrote and sang the final credits song which, like so much else, was unexpectedly good.

This is one of those films that everyone loved making. Listening to Maya you might be forgiven for thinking that movie making is like giving a party which the guests remember for years afterwards.

When asked at the L.A. Film Festival Q&A - an added extra - whether being a director, mother and wife caused a clash of responsibilities, Maya concurred. Being a director is hard, she said. Its routines and conflicts sometimes get in the way.

It took a family to make this family film. You can't help liking Maya which makes you want to like the film even more. 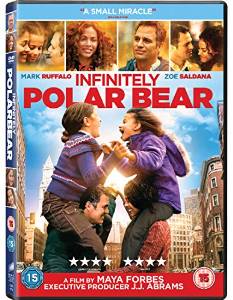 A manic-depressive mess of a father tries to win back his wife by attempting to take full responsibility for their two young daughters.