Despite this being marketed as the grand finale to the series, several other titles came afterwards (Wes Craven’s New Nightmare, Freddy vs. Jason and the 2010 remake of A Nightmare On Elm Street) and Freddy’s Dead emerges as one of the weakest entries in the series.

Besides the theatrical trailer, the extra features, few and slight as they are, include several interesting conversations with director Rachel Talalay, who had been a mainstay of the series, working on it in various capacities since the first film. In Rachel’s Dream she discusses her feelings on finally being able to take the helm of an Elm Street film and her attempts to move away from the overtly fantastical feel of earlier instalments to a more urban, gritty tone – citing John Waters, David Lynch and cult favourite Carnival Of Souls as primary influences. In 3D Demise she reveals her concerns about filming in 3D, the various processes it entailed and how, while it wasn’t what she necessarily wanted to do, pressure from the studio prevailed. Effects wizard John Carl Buechler is on hand to get into the more technical aspects of shooting in 3D (in less than two minutes).

In 86’D, producer and New Line head Bob Shaye briefly chats about the series as a whole, its successes and shortfalls, and why Freddy’s Dead was intended to be the last. He admits that many of the plots of the sequels were constructed around special effects and the use of 3D in this instalment was a blatant gimmick. Last, but certainly not least, is Hellraiser, a brief and candid chat with Clive Barker who, in his usual frank yet exquisitely eloquent manner, discusses the problems of horror franchises. Unfortunately it’s only a minute long chat. 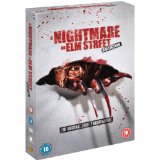 Freddy haunts the dreams of his daughter and Springwood's last surviving teenager.