Twelve of the films in this collection have accompanying audio commentaries. As with the films themselves, the sound quality varies quite a bit and hasn't been balanced, but viewers are perhaps less likely to want to watch them all in succession, anyway.

Several concentrate on the experience of making short films, providing useful insights for those who might be interested in doing so themselves. The commentaries for Freiheit and The Lunch Date go into a lot of technical detail, whilst that for George Lucas In Love is all about working with a very tight budget. Probably the most rounded and informative is that for Carmen, which is also packed full of personal reminiscences, making it more accessible to the casual viewer. The commentary on The Wraith Of Cobble Hill has lots to say about the animation processes involved, as well as explaining something of what the director was trying to do with the story.

Some of the commentaries are interesting in their own right, with those for Paperboys, Feelings and Daybreak Express particularly philosophical. Rawson Marshall Thurber is clearly amused by the idea of discussing his slapstick comedy Terry Tate: Office Linebacker, but his commentary is one of the most entertaining. Others don't live up to the quality of the films they accompany, Stefan Nadelman's monotone over Terminal Bar being a particular disappointment.

There's a good deal of information here for people who want to know more about the history of the films and the awards they've won, but perhaps less that will engage the general viewer. 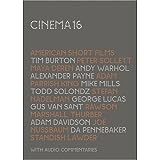 A collection of early shorts from renowned American directors