Having aired in the US on Spike TV, in Japan on Fuji Television and in the UK on Bravo earlier this year, Takashi Okazaki's five-episode animation now gets a director's cut two-disc R2 DVD release. If you haven't caught up with this superior cult anime yet, now's your chance to see what Samuel L Jackson can do when he bows his head into the genre.

As well as helping to exec-produce, Jackson voices both the lead role of the titular Afro (and no one else could have done it so well) and his comic companion, Ninja Ninja. Afro is a would-be lone swordsman with nary a word for anyone, wandering a retro-feudal Japanese landscape punctuated with futuristic technologies. Ninja Ninja is his clowning motormouth shadow with a dozen words for every one Afro doesn't use. As Afro journeys he's set upon by various bandits and assassins all intent on killing him to gain his legendary number two headband.

As the episodes progress a series of well-tuned flashbacks scythe in the details. Afro's father wore the number one headband and was killed for it in front of his young son, and ever since Afro has been seeking revenge. Only the wearer of the number two band can challenge the now near-immortalised number one, Justice (voiced with hissing venom by Ron 'Hellboy' Perlman). So Afro's had to work his way through the numerous bands on his vengeful quest to gain the number two to finally be able to honour his father. Of course, that means frequently fighting off all attackers intent on getting the band for their own crack at the title.

And what a blood and gore filled quest it is. When Afro's blade starts swinging limbs fly, bodies split and heads pirouette, each with fantastic sprays of crimson. The fight scenes are frenetic, blurred yet precise, almost operatically stop and intense go clashes. They exemplify the animation house Gonzo's terrifically mature and stylised old skool cell animation; muted tones shot through with colour amid skilfully rendered backdrops and variously framed from constantly inventive angles by director Fuminori Kizaki. Throughout Afro cuts an iconic figure with his oversized Blaxploitation hair zigzagging in the breeze as he stares down an equally exaggerated but realistically drawn foe.

Of course, the best anime doesn't rely on looks alone. Scribes Tomohiro Yamashita, Yasuyuki Mutou, Derek Draper and Chris Yoo have developed a simple but effective narrative and fleshed it with enough detail, back story and pace to keep it involving until the killer denouement. Afro is an instantly iconic meld of street soul and ancient samurai but they've created clearly defined dramatis personae who all have their own journeys to complete as Afro moves on towards his vengeful goal. They also avoid that old anime trait of delivering clunking chunks of exposition all in one go - well, there's not too much, anyway. Music by The RZA of the Wu-Tang Clan further imbues the series with a hearty sense of cool, perfectly complementing Afro's style and Jackson's mo-fo strewn dialogue.

Story, sight and sound - Afro Samurai solidly slashes its three marks to be an enjoyably high-end and visually stunning anime - with a wealth of DVD extras to round out the experience.

As well as some 15 minutes restored footage to give us the fullest account of Afro's travels, we're treated to unedited dialogue as it was originally written and meant to be heard. In the Booth is the main featurette, a lengthy making of that covers most aspects of the production. It features all the main cast and crew collaborators, specifically Takashi Okazaki, who nurtured the project for a decade, co-producer Eric Calderon and, of course, uber-comic and anime fan Sam the Man.

Eric Calderon provides enthusiastic individual commentaries for each of the characters in the Profiles, which focus in on the main players and adversaries (warning: they contain spoilers). The RZA, a dedicated martial arts film fan, gets his own all too brief but entertaining doc, explaining how he theorised and devised the ultra cool soundtracks that express and fuse with rather than just accompany Afro's journey from boy to man.

Both Eric and the RZA feature heavily in the short footage from Afro's successful 2006 Comicon launch. Given how brilliantly stylised, ground-breaking and flowing the animation is, and how well it was received at the convention, you'd be forgiven for expecting more specific focus on the traditional cell animation techniques used. It's adequately covered in the making of, but as a separate extra you only get a limited selection of line and colour prop and character stills to view.

TV and soundtrack promos complete the discs' content. A well-designed print booklet, five exclusive art cards and reversible DVD artwork covers for each disc's case complete the dedicated package. It all adds to the enjoyment of one the most esteemed animes of the year and is a worthy edition to any discerning fan's collection. 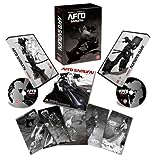 A black Samurai seeks revenge for his father's death.