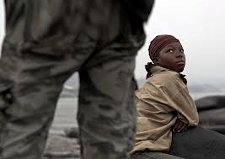 Oscar-nominated film War Witch will be among those screening

Currently in its 17th year, it brings together documentary and fiction films with the intention of galvanising those who watch them to join those taking action against injustices many face every day.

This year's London arm of the festival runs from March 13 to 22 at cinemas including the Curzon Soho, Curzon Mayfair, ICA and Ritzy Brixton. It will open with Kim Longinotto's Salma and feature the Oscar-nominated films War Witch and The Gatekeepers.

The New York edition of the festival will run from June 13 to 23.

Salma
The story of a woman shut away by her family for 25 years, who became a published poet, politician and activist.

Which Way Is The Front Line from Here? The Life And Time Of Tim Hetherington
Tribute to the photojournalist and documentarian who was killed in Libya in 2011.

Wadjda
A young Saudi girl who will stop at nothing to earn enough money to buy the bicycle she craves.

The Act Of Killing
People responsible for the mass murder of suspeced Communists at the onset of the military regime in 1965 are challenged to restage their actions and question the pride they still take in them.

My Afghanistan - Life in the Forbidden Zone
Nagieb Khaja, a Danish journalist of Afghan origin, gives people living in outlying communities in Helmand province mobile phones equipped with cameras and asks them to film their daily lives.

In The Shadow Of The Sun
The story of two men with albinism in Tanzania pursuing their dreams in the face of virulent prejudice.

The Gatekeepers
Six former heads of Israel’s internal security agency, the Shin Bet, discuss their nation’s past, present and future.

War Witch
A former child soldier recounts her past to her unborn child.

Tall As The Baobab Tree
After her brother has an accident, her father is forced to sell her younger sister into an arranged marriage, but Coumba hatches a plan to save her.
A-Z of Human Rights Watch Film Festival 2013 reviews >>>

How The Gatekeepers opened up
Dror Moreh on documenting the opinions of six former Shin Bet chiefs.